For decades, this rail corridor has acted as a major barrier to urban permeability, adding to road congestion, limiting links between suburbs and restricting the introduction of new rail services.

The new design proposed an elevated viaduct with a consistent architectural expression across the five station precincts. Each was conceived as a unique community hub, consisting at ground level of an urban plaza and satellite pod structures for information and bike storage.

WSP Specialist Lighting worked closely with the Architectural team on the design of the stations aiming to seamlessly integrate the lighting within the Architecture, creating a communal space that meets the requirements of safety and design as well as highlighting the striking Architectural features.

The removal of the nine level crossings along the rail corridor and elevating the rail line unlocked space for public realm activation below. These areas were previously unavailable for public use and now provide opportunities for community use under the elevated rail line. This includes large expanses of open space, parklands, community areas and 17km of new pedestrian and cyclist paths, all of which required integration and design of public lighting. 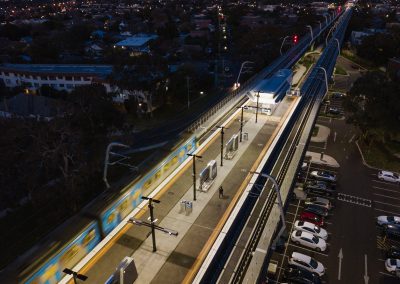 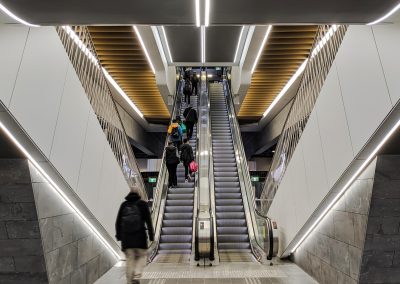